The Limited Case for Penalizing Failures to Innovate

When policymakers and academics think about designing optimal innovation incentives, they almost exclusively limit their considerations to alternative types of reward incentives.

But in our forthcoming article in the University of Chicago Law Review, we show that under specific circumstances, innovation sticks – potential penalties for failures to innovate – can play a valuable role in our innovation policy, either alone or in conjunction with innovation carrots. What’s more, we provide examples of several innovation sticks that already have been used with varying success, including the Federal Corporate Average Fuel Economy (CAFE) standards, portions of the “No Child Left Behind” Act, and cap and trade systems such as the Chicago Climate Exchange. 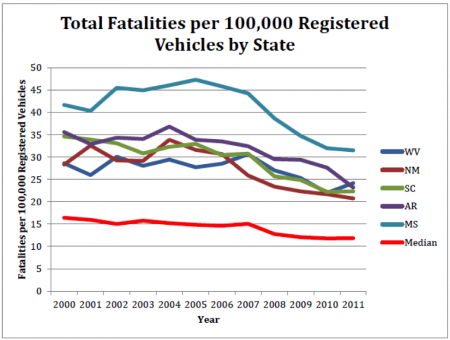 Finally, we apply our approach to a new area to which we think innovation sticks may be well-suited: the problem of car fatalities. Our model suggests that a relatively simple system of yardstick penalties could help reduce national auto fatalities by as much 20%, simply by bringing laggard entities (companies and states)  to the median safety level that has already in practice been achieved. Figure 4 from the article, reproduced to the left, graphs the total fatality rates of the five states with the highest fatality rates over time. Although fatality rates have been trending down since the year 2000, certain car manufacturers and states lag behind what is technologically feasible with regard to external safety. We estimate that inducing these and other laggard states to reduce their fatality rates to the state median would reduce fatalities annually by more than 7000 lives per year.

We’ve posted a series of articles to Forbes to explain and elaborate on the ideas discussed in our forthcoming paper. The articles are:

2. A New Meaning of the Light Bulb

3. A New Meaning of Dodge

4. A New Meaning of Miss